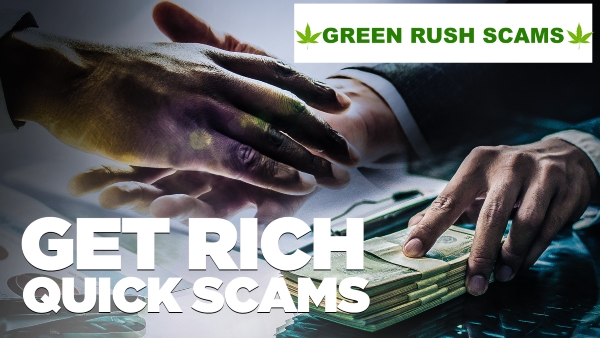 In the rush to get rich, many will let down their guard. This is a prime environment for scammers to emerge. In this article I will talk about a personal experience dealing with a Cannabis scammer in 2019.

As a person verse in this world, he wasn’t able to get any money. However, you can learn from his techniques. See how scammers are trying to take your money in this new legal Cannabis environment

Back in 2006 I setup a company in the US to import products from china and distribute them across north america. As i was in university at the time, this was great extra money on the side. I didn’t bother with the traditional route of internships. This invaluable road took me down the road of hard knocks. I learnt about the real cut-throat world of business

One thing that stood out was that at the time, there seemed to be a limit of $15,000 before the FBI would investigate a potential scam. I remember navigating the forums of Alibaba.com and seeing on a daily, stories of people who sent their money to china, and then promptly stopped hearing from the vendor.

There is nothing new about this people. Everyone knows about the Nigerian Prince, so the narrative has simply shifted. Don’t be fooled, all scammers share very similar traits since they all have the exact same goal

The ultimate goal of a scammer is to get your money. Depending on how much of a sucker you are, they will strike on day one or slowly work you down with multiple phone calls. They will talk about their dog, family and other aspects of their lives to make themselves seem human and real. Here are some tell tale signs of a scammer

A scammer is skilled in gaining your trust. This person has made a decision before they ever called you, that they deserve your money more than you and they will fool you into sending it. This is a dangerous mindset and you must have up your guard

OK, so I said that the beginning of the article that I had my own experience. In my case, this person appeared on my twitter DM’s. We will call him Paul for anonymity of the scammer (i know…). Anyway, Paul greeted me with a compliment about my profile. First sign of a scammer, an effort to blow up my ego and have me drop my guard. This was a red flag especially since the twitter account was fairly new with less than 50 followers.

This person went on to share their story about being in Colombia where many Canadian companies were supposedly interested in investing. He went on to spin a story of how he was championing the defense of Colombian cannabis farmers by getting in between them and the big corporations trying to take advantage of him. He was not able to make his press release public, but he had secured 400 hectares of land in contracts with the local farmers

He went for step 2, a more personal communication line. He requested that we talk over whatsapp. This is the second red flag, a supposed company with millions in assets, wanting to talk over whatsapp instead of a normal land line. How often has that happened in your life, not the option of whatsapp, but it being the only route for communication? This gives the scammer your personal cell phone number, not a business, or 1800 number

The scammer then began a campaign to attempt talking to me throughout the day via messages. Again and again talking about the need for investment in their evolving business. I was even offered 10% of any money i could fool others into sending to this scammer.

I listened to the scammer to get an understanding of what’s happening in today’s green rush. I was shocked but not surprised to see them active in this space. Bitcoin is the last place where I saw heavy scams and thought they were going to stay there for a while. Oh well, just like any business, scammers diversify and they are here in the Cannabis industry

BE CAREFUL. First of all, the green rush isn’t what you think. You are not going to get rich quick, our new government drug lord has made sure of that. Don’t send your money to anyone outside of north america if you don’t know what you are doing. Always use a reputable 3rd party escrow account which operates under the same legal jurisdiction as where you live. This is a dog eat dog world. If you are going to poke your head up to feed, you should anticipate that there is a predator waiting.

After eventually reading this article, I am sure this scammer will switch to a new story. So its important that you look for the traits of a scammer and not anticipate the exact same scam. Like a virus or technology, they evolve